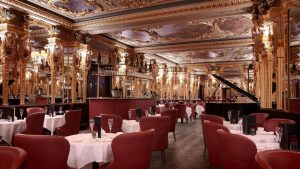 What a wonderful thing it is to say that we, as humans, are allowed to eat three square meals a day? Or, at least in the case of the French, but what about snacks? See, some people believe in three meals a day paired with two fist-sized small snacks, some people only prefer two meals a day and a snack and the list goes on and on.

Whatever your preference might be when it comes to your meals a day, you have to admit, eating the food that the world has to offer is one of the best things about being a human. I mean, it’s not like a Unicorn would ever be able to eat pizza… Right, those don’t exist. Or, at least we don’t think so.

Nevertheless, you know what I mean and, another truth to this wonderful, diverse world we live in, is travel and goodness, are their many countries with some of the best restaurants in the which should be added to your bucket list…

Defining Some of the ‘Best’ Restaurants in the World: Our Pick

Well, this is no shock. I mean, have you seen the size of pizza slices in New York… Not that we’re talking about their pizza, which is also pretty damn good, but their amazing, brasserie-styled favourite, situated in Manhattan.

Type of food? French of course, which is something you’d know if you’re acquainted with the word ‘brasserie’ which means ‘restaurant’ in French.

Considered the best of the best, this gem was opened 21-years ago and is unique to other restaurants as it, still till today, has the personal touch of its creator, Keith McNally. If you’re expecting New York in this restaurant, you’ll be in for quite the surprise. It’s all Parisian-style in décor, art and most importantly, the food. With some of France’s most classic dishes such as steak frites, famous soups and the most amazing seafood you’ll try, this one is a definite winner.

Ah, the main city of the Irish. Just what can we find here you might ask?

A taste-testing experience for your palate that is. According to Damien Grey, an Australian-born chef will serve you everything from sweet, bitter, sour, salty and everything in between. His menu offers 12-course menus and is situated in the suburb of Blackrock, seaside. With his menu changing every two weeks and includes it all. Serving a favourite, duck with trompette mushrooms, lavender and hazelnuts one week and who knows what the next, this restaurant is a must-try.

Now, we cannot forget to mention Italy. Many Italians would be furious and use their hand gestures to emphasize the severity of leaving them off of any list when it comes to the best of the best food on the planet.

Situated in Florence, with a rustic setting of the best interior, almost novel-like, this restaurant has been opened for 15 years and is considered to be one of the most beautiful artisan-like Italian restaurants in Florence. With a fully stocked wine bar and bakery, the Italians definitely know how to create the ultimate experience over a table with a good meal.

From perfectly roasted pigeon to some of the most amazing pasta in the world, Il Santo Bevitore was definitely designed to impress.

As one of the most elite cities in the world, London has a lot to offer and most certainly does not lack in its food. With its perfectly illuminated Saint Terence’s-inspired stained-glass window panes, you wouldn’t have guessed it, but this one is French too and since starting in the 80’s, has experienced a massive change in its menu, but not its design.

So, what’s on the menu of this rather ‘trip down memory lane’? A whole lot of French cuisine with a rebooted twist my friend. From some of the best sausage rolls in the world to a tripe -and-cuttlefish gratin classic, you’re in for quite the nostalgic, interesting experience. The French way of course.